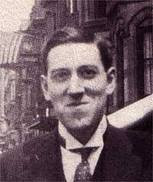 H.P. Lovecraft' sojourn in Brooklyn was not altogether a happy one. Brooklyn's polygot cauldron of humanity was almost too much for the author to bear while he lived in Brooklyn Heights at 169 Clinton Street away from his wife Sonia Greene. Lovecraft's delicate state of mind was all the more affected by his struggles as a writer in New York at the time.

Despite these pressures Lovecraft managed to write one of his greatest short stories 'The Horror at Red Hook' (1925), while living in Brooklyn. The story paints an exotic image of Brooklyn as peopled by strange admixtures of cultures beyond the pale of society and provides a vivid window into Brooklyn society of that time despite Lovecraft's rampant xenophobia.


“ He had for some time been detailed to the Butler Street station in Brooklyn when the Red Hook matter came to his notice. Red Hook is a maze of hybrid squalor near the ancient waterfront opposite Governor’s Island, with dirty highways climbing the hill from the wharves to that higher ground where the decayed lengths of Clinton and Court Streets lead off toward the Borough Hall. Its houses are mostly of brick, dating from the first quarter to the middle of the nineteenth century, and some of the obscurer alleys and byways have that alluring antique flavour which conventional reading leads us to call “Dickensian”.

The population is a hopeless tangle and enigma; Syrian, Spanish, Italian, and negro elements impinging upon one another, and fragments of Scandinavian and American belts lying not far distant. It is a babel of sound and filth, and sends out strange cries to answer the lapping of oily waves at its grimy piers and the monstrous organ litanies of the harbour whistles. Here long ago a brighter picture dwelt, with clear-eyed mariners on the lower streets and homes of taste and substance where the larger houses line the hill. One can trace the relics of this former happiness in the trim shapes of the buildings, the occasional graceful churches, and the evidences of original art and background in bits of detail here and there—a worn flight of steps, a battered doorway, a wormy pair of decorative columns or pilasters, or a fragment of once green space with bent and rusted iron railing. The houses are generally in solid blocks, and now and then a many-windowed cupola arises to tell of days when the households of captains and ship-owners watched the sea.

From this tangle of material and spiritual putrescence the blasphemies of an hundred dialects assail the sky. Hordes of prowlers reel shouting and singing along the lanes and thoroughfares, occasional furtive hands suddenly extinguish lights and pull down curtains, and swarthy, sin-pitted faces disappear from windows when visitors pick their way through. Policemen despair of order or reform, and seek rather to erect barriers protecting the outside world from the contagion. The clang of the patrol is answered by a kind of spectral silence, and such prisoners as are taken are never communicative. Visible offences are as varied as the local dialects, and run the gamut from the smuggling of rum and prohibited aliens through diverse stages of lawlessness and obscure vice to murder and mutilation in their most abhorrent guises. That these visible affairs are not more frequent is not to the neighbourhood’s credit, unless the power of concealment be an art demanding credit. More people enter Red Hook than leave it—or at least, than leave it by the landward side—and those who are not loquacious are the likeliest to leave.

Malone found in this state of things a faint stench of secrets more terrible than any of the sins denounced by citizens and bemoaned by priests and philanthropists. He was conscious, as one who united imagination with scientific knowledge, that modern people under lawless conditions tend uncannily to repeat the darkest instinctive patterns of primitive half-ape savagery in their daily life and ritual observances; and he had often viewed with an anthropologist’s shudder the chanting, cursing processions of blear-eyed and pockmarked young men which wound their way along in the dark small hours of morning.

One saw groups of these youths incessantly; sometimes in leering vigils on street corners, sometimes in doorways playing eerily on cheap instruments of music, sometimes in stupefied dozes or indecent dialogues around cafeteria tables near Borough Hall, and sometimes in whispering converse around dingy taxicabs drawn up at the high stoops of crumbling and closely shuttered old houses. They chilled and fascinated him more than he dared confess to his associates on the force, for he seemed to see in them some monstrous thread of secret continuity; some fiendish, cryptical, and ancient pattern utterly beyond and below the sordid mass of facts and habits and haunts listed with such conscientious technical care by the police. They must be, he felt inwardly, the heirs of some shocking and primordial tradition; the sharers of debased and broken scraps from cults and ceremonies older than mankind. Their coherence and definiteness suggested it, and it shewed in the singular suspicion of order which lurked beneath their squalid disorder. He had not read in vain such treatises as Miss Murray’s Witch-Cult in Western Europe; and knew that up to recent years there had certainly survived among peasants and furtive folk a frightful and clandestine system of assemblies and orgies descended from dark religions antedating the Aryan world, and appearing in popular legends as Black Masses and Witches’ Sabbaths. That these hellish vestiges of old Turanian-Asiatic magic and fertility-cults were even now wholly dead he could not for a moment suppose, and he frequently wondered how much older and how much blacker than the very worst of the muttered tales some of them might really be.”
Read the rest of this story here.