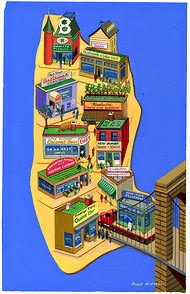 For a place selling beer and pulled pork sliders, the Brooklyneer has provoked a lot of controversy. This new bar is dedicated to all things Brooklyn, particularly, the menu declares, the borough’s “newly-emerging food artisans.” There are Brooklyn hot dogs and Brooklyn pickles and Brooklyn whiskey. You can order toast points spread with Boerum Hill-made ricotta and Carroll Gardens-jarred jam, slam oyster shooters with Greenpoint-brewed kombucha.

The problem with the Brooklyneer? It’s in Manhattan. This strikes some as a particularly cynical bit of appropriation: a grass-roots food scene turned into a theme-park facsimile, just a few subway stops away.
The New York food blogs started sniping months before the bar opened. Last month, it inspired a mock-indignant rant in The Daily News, which saw in the new place “the end of Brooklyn cool.”

“We all think it’s pretty hilarious, the amount of press it’s generating,” said Aron Watman, an owner of the Brooklyneer. Mr. Watman and his two partners, Billy Waite and Neena Dutta, claim their motives are pure: they are Brooklyn residents themselves, and merely wanted to share the food and drink they love with the rest of the city. A Brooklyneer, in their lexicon, is “someone who admires Brooklyn.”
Read the rest of the article here.
Posted by Author at 10:15 AM