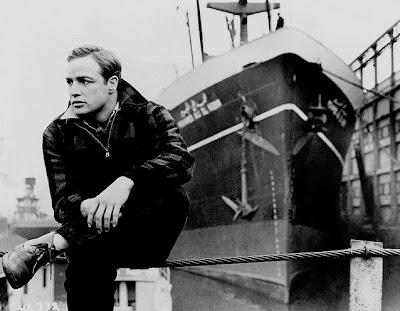 Brando in "On the Waterfront"

A biographical sketch of Arthur Miller's exploration of the Brooklyn waterfront which led to his writing The Hook which then became the "inspiration" for Bud Schulberg's screenplay for On the Waterfront directed by Elia Kazan.(Excerpted from original article.)

In many ways, it is Miller's best-observed work. Not only is the atmosphere based on his own dockside wanderings, but the play's scandalous crux—will Eddie, driven by his attraction to his own niece, do something disastrous?—turns out to be based on a true tale. It was shared with Miller by his friend Vincent "Jim" Longhi, who was then a Red Hook waterfront lawyer like Alfieri, the play's narrator that he inspired.
About a year after Miller's death in February 2005, and a few months before Longhi passed away, I happened to interview the lawyer about the old waterfront. Unlike his "portly" stage likeness Alfieri, Longhi was, at 90, a tall, trim and elegant man. Sitting in his Manhattan law office on lower Broadway, he recalled how his friend Miller, who lived in picturesque Brooklyn Heights in the late '40s, "often thought about that mysterious world of the Brooklyn Italian waterfront. . . . But he being an intellectual, who's gonna talk to him? Nobody." In his autobiography, "Timebends," Miller remembered wondering, on his daily walks, about "the sinister waterfront world of gangster-ridden unions, assassinations, beatings, bodies thrown into the lovely bay at night." But, he was forced to admit, "I could never penetrate the permanent reign of quiet terror on the waterfront hardly three blocks from my peaceful apartment."

That's where Longhi came in. They met during Longhi's 1946 antimob campaign for Congress in Brooklyn's 12th District. (Miller's first great success, "All My Sons," would open later that fall.) "How can I help?" Miller asked the young candidate. "Make a movie!" Longhi answered, and, working with the director Elia Kazan, they tried over the following months to make a waterfront film. Longhi told Miller tales of the criminal docks, and particularly of his great hero, the martyred rebel longshoreman Pete Panto. Miller remembered touring the homes of longshoremen, "tuning my ear to their fruity, mangled Sicilian-English bravura." When Longhi brought Miller down to Red Hook's Columbia Street to show him men lining up to be picked in the morning shape-up, the young playwright was thoroughly shocked. He saw men herded docilely together, "waiting for the hiring boss, on whose arrival they surged forward and formed in a semicircle to attract his pointing finger and the numbered brass checks that guaranteed a job for the day," Miller remembered. Reacting to another visit where men were "tearing at each other's hands" in "a frantic scramble" for the morning's last few work checks, "America, I thought, stopped at Columbia Street."

His script about Longhi's hero, Panto, was called "The Hook," and it might have been made by Columbia Pictures' Harry Cohn had it not been for some changes the studio requested that Miller found untenable. In 1950, reflecting the political climate of the time, Cohn had the screenplay reviewed by the FBI. The studio head offered to greenlight Miller's waterfront story as long as its controlling racketeers were recast as Communists. Miller refused and, according to Longhi, "threw the script into a trunk." (Kazan would soon find another docks project with writer Budd Schulberg—what later became "On the Waterfront." Many regard "A View From the Bridge" as Miller's personal answer to Kazan for his 1952 House Un-American Activities Committee testimony and for making a masterpiece without him.)

Miller first heard the story that became "A View From the Bridge" while on a trip with Longhi to Sicily in 1948. "Longhi mentioned a story . . . of a longshoreman who had ratted to the Immigration Bureau on two brothers," Miller wrote, "his own relatives, illegal immigrants who were living in his very home, in order to break an engagement between one of them and his niece." Longhi told me, "it happened to my client . . . who turned to me and said, 'I'm going to kill so-and-so,' and then it turned out that I figured he must be in love with the kid. And I told this story to Miller and he said, 'What an opera!'"

Read the rest of the article here
Mr. Ward is author of "Dark Harbor: The War for the New York Waterfront," to be published by Farrar, Straus and Giroux in June.
Posted by Author at 11:03 AM

Thanks for the information you have shared,.
Brooklyn History