From Brooklyn’s Heights: An Early 19th-Century Artist and His Skyline View By Alexandra Peers June 15, 2010 | 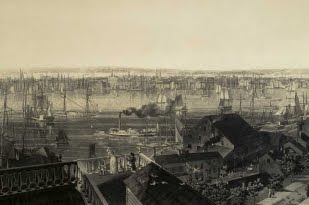 From Brooklyn’s Heights: An Early 19th-Century Artist and His Skyline View
By Alexandra Peers for the New York Observer June 15, 2010

Who's the next hot young Brooklyn artist? How about collecting one of the first ones instead.
J. W. Hill arrived in America in 1819 at the age of 7 and learned much of his trade-engraving aquatints-at the Brooklyn studio of his father, British émigré artist John Hill
J.W.'s images, unlike Dad's, were of where he grew up, New York City and State. Turning into something of a Big Apple version of John James Audubon. Hill illustrated a sweeping tome on the zoology of New York State, among other natural history projects. And in 1837, he painted New York, from Brooklyn Heights, in a landscape that showed a couple and their young children gazing at the Manhattan skyline. From the family's spot at the apex of Furman Street, St. Paul's, Trinity Church, City Hall and the Fulton Fish Market are visible.

The image became famous and was eventually adapted by William James Bennett into a lithograph that was printed and widely distributed by the prolific publishing firm of Currier & Ives.
Read the rest of the article here
Posted by Author at 6:16 PM

Labels: 2010 |, From Brooklyn’s Heights: An Early 19th-Century Artist and His Skyline View By Alexandra Peers June 15