Mohawk Roots in Brooklyn - Reaghan Tarbell's "To Brooklyn and Back: A Mohawk Journey" 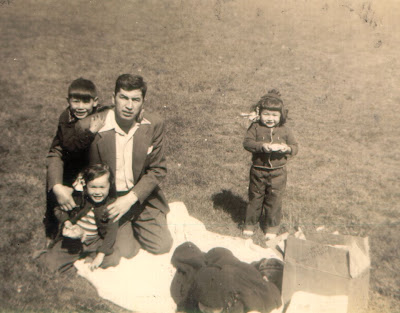 Reaghan Tarbell's documentary film “To Brooklyn and Back: A Mohawk Journey" is an extraordinary personal family memoir and history about the Kahnawake Mohawk people who settled in Brooklyn. Many Mohawk men worked as steelworkers on New York skyscrapers while living in Brooklyn and helped build important New York landmarks such as the Verrazano-Narrows Bridge the Seagrams Building, and the Time & Life Building.

A common misconception is that the women simply followed their ironworker husbands to the city. The truth is many left the reserve by themselves to find work in Brooklyn, just like the Mohawk men. Reaghan's late grandmother, Ida Meloche, was one of them. At the age of 16, Ida moved to Brooklyn with her elderly mother in search for work and a "golden opportunity."

Reaghan’s film takes us on a journey back to the Kahnawake Mohawk Reserve near Montreal, Canada on the St. Lawrence River where Reaghan’s family members still live. Mohawk women and men in Kahnawake speak about the Quebec Bridge disaster that took place on August 29th, 1907 when thirty-three Mohawk steelworkers died when the bridge collapsed. An annual remembrance ceremony is held in the Kahnawake Reserve for the spirits of the men lost on that tragic day. We learn how this tragedy caused Mohawk men to spread out in the 1920's to find work elsewhere in faraway places including New York and Brooklyn.

The Mohawk steelworkers as most New Yorkers know are a legendary presence in urban folklore. Mohawk men worked alongside other Native Americans as steelworkers on New York City construction sites on many large-scale projects.

The words of Reaghan's extended Mohawk family on the Kahnawake Mohawk Reserve illuminate the complex difficulties that Mohawk women and children faced while adapting to life in downtown Brooklyn. The Brooklyn Mohawk neighborhood became know as Little Caughnawaga (a modification of Kahnawake.)

The Cuyler Presbyterian Church on Pacific Street held services in the Mohawk language led by Rev. Dr. David Munroe Cory who learned the Mohawk language. There was an exclusively Mohawk bar called the Wigwam at 75 Nevins Street, which was also like a community information center where Mohawk men could get leads on jobs, pick up mail and catch rides back to Kahnawake.

Most Mohawk families eventually moved back to the Kahnawake Reserve over the years preferring to live amongst their own people and to have their children retain their cultural roots.

Sources: New York Times article An Indian Community Flourished and Faded In a Section of Brooklyn
Published: December 28, 1996
Posted by Author at 10:31 AM

Labels: Mohawk Roots in Brooklyn - Reaghan Tarbell's "To Brooklyn and Back: A Mohawk Journey"