A GLOSSARY OF BROOKLYNESE - Excerpted from Brooklyn, A State of Mind by Michael W. Robbins and Wendy Palitz 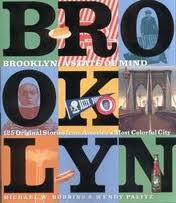 
A GLOSSARY OF BROOKLYNESE

Brooklyn has always been a borough of immigrants and for immigrants the “th” sound in English is a bitch. As a vocal noise,"th" is practically unique to the ancient Anglo-Saxon language, in which it had its very own letter of the alphabet, known as the “thorn.” The French, for example, when attempting to pronounce this sound make do with “z.” (“Is zat so?”) But in Brooklyn the letter “th” at the end of a word (as an ultimate fricative consonant) are invariably pronounced like a “t”:

When the letter “th” come at beginning of a word., Brooklynites sometimes pronounce them as “t”…

Sometimes in ethnic Brooklyn pronunciation of the short “o” is “hypercorrected” into a cross between a drawl and a whine:

The letter “r” is seldom pronounce anywhere in the Northeast, from New Hampshuh to Hahvud to New Yawk. In Brooklyn, “more” is “moowuh,” “door” is “doowuh,” and “her” is “huh.” “Brooklyn” itself comes out (something like) “Bwookn,” while “Canarsie” is “Cnawsee.” Furthermore, the vowel sound that precedes the unpronounced “r” sound is pronounced “oi.”:

No one really knows is so in The American Language, H.L. Mencken attributes it to the influence of Yiddish. Anyway, and perversely enough, in Brooklyn the “oi” sound itself is pronounce “er”:

Thus, when Dodger knuckleballer Hoyt Wilhelm dropped to his knees after being stuck by a line drive, the Ebbets Field crowd gasped as one, “Hert’s hoit!” - Sean Kelly

Labels: A GLOSSARY OF BROOKLYNESE - A State of Mind by Michael W. Robbins and Wendy Palitz, Excerpted from Brooklyn